During the lockdown I found myself working my acupuncture skills on my nephew.  He is in my bubble so it was safe to do so.  Before I tell you about the treatment itself let me give you some background information.

One month ago, he suffered a very bad fall whilst cycling.  He broke his scaphoid bone on his left hand and had surgery to fix with a metal rod inserted to keep the bone secure.  On the right, some soft tissue damage around the forearm  Once surgery was complete and a cast was placed it was time to think about what I could do to help his recovery. 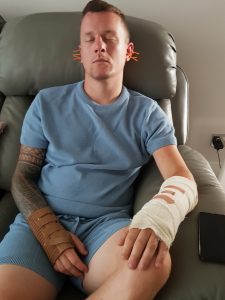 I decided to use auricular acupuncture as a treatment for a couple of reasons.  First of all, it’s really easy, the patient just sits there, doesn’t need to remove clothes, which would be a problem with his injuries. You can hit the exact area of the body you need to without going near it, which meant that I could affect the wrist even though a cast.   It’s relaxing and calming and if you are someone that’s a bit worried about needling, which he was slightly, you don’t see the needles because they are on the ear.

Treatment wise, as you can see from the picture, I placed a few needles in both ears.  I am focusing on the part of the body where the injury is and also pain relief points. Therefore: on the left arm I am focusing on his wrist where the fracture was and right forearm for the soft tissue damage.  Needles were retained between 20 to 40 mins and this was practised once a week.  Gentle light massage was applied to the forearm after 2 weeks to encourage blood flow with magnesium gel.  RICE routine (rest ice compress and elevate) was regularly used by patient every day.

Outcome: On his fourth session the right ear was not needled.  This was because there were no tender points around the forearm area which meant it was no longer inflamed!!  The left ear was still telling me it wasn’t ready just yet.  Therefore for this treatment, my needling focused on the left only.  As the right was better, I introduced Fascial Manipulation both deep and superficial to allow straightening of the arm which consequently gave full range of movement.

Plan of action over the next few weeks:  I will continue to work on the left ear and once the cast is off some Fascial Manipulation to restore adequate gliding to all fascia around the area.

I am really pleased with the results and would thoroughly recommend anyone to have auricular acupuncture if any of the above resonates with yourself.